Proof that science and law can mix with creativity: an interview with Doritt Carroll and Lalita Noronha

Doritt Carroll, author of GLTTL STP, and Lalita Noronha, author of Her Skin Phyllo-Thin, don’t have their degrees in English. But that doesn’t stop them from writing and being published. 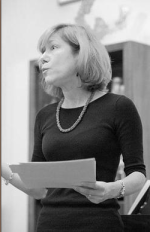 Carroll (photographed left), a lawyer, received her undergraduate and law degrees from Georgetown University. Her works, In Caves and GLTTL STP, were published by BrickHouse Books. The title poem was then nominated for a Pushcart Prize. Her poems have appeared in several different magazines and journal reviews.

Noronha (photographed right), a native of India, came to America to earn her Ph.D. in microbiology. She has won the Maryland Literary Short Story Award twice (1997, 2001), a Maryland Individual Artist Award (2002), the National League of American Pen Women, and other awards. Her work consists of Where Monsoons Cry (fiction) and Her Skin Phyllo-thin (poetry). Noronha is also a fiction editor for the Baltimore Review and a retired science teacher at St. Paul’s School for Girls.

Yet based on their professional work experience, you’d never think the two would be successful authors with published works. Both authors will be at the reading event on April 10 at the Mark Cottman Gallery to promote their works.

To get to know the authors a little better, I was able to interview the two by email where the authors talked about their passion for writing, their hopes for the reading event, and advice for any writers out there.

Doritt Carroll: Writers write.  It’s what we do. I never believe people who say they’re going to write a novel when they retire.  If you’re going to be a novelist, you’re compelled to write, right now.  You’ll neglect their work and forget to eat to get it on the paper.

With regard to GLTTL STP in particular – unlike a lot of poets, who select a title after they’ve written a manuscript, I find a title and it tells me what book to write.  A “glottal stop” is a term of art in singing.  It means a moment when you stop the sound without taking a new breath.  So GLTTL STP (with its strangled spelling) is a book about things not said.  Sometimes it’s good that we didn’t say them, and sometimes it isn’t.

Lalita Noronha: The title of this work [Her Skin Phyllo-Thin] refers to my mother. She first came to America at the age of 59 to take care of her first grandchild so that I could return to work. She was 86 when she died in India. Watching her slowly grow older and weaker was hard. The distance between our countries made frequent visits impossible. So we were always aware that any meeting could well be the last. As Michael Salcman wrote, “These are feminist poems in the strongest, must subtle sense, filled with the knowledge that flows across generations from grandmother and mother to a daughter who is both scientist and poet.”

Included in the book are other poems of separation—immigration, divorce, youth—as well as some science and ekphrastic poems which seemed to fit the theme.

BHB: Doritt, you have your law degree and are well experienced in the field.  What attracts you to creative writing then?

DC: If there’s a lawyer who ever actually wanted to be lawyer, I haven’t met her yet.  Law is something you do to put food on the table.  Nonetheless, it has taught me something useful, namely, that you can work hard and excel at something that you don’t enjoy.  Let’s put to rest forever the notion that there is such a thing as an “artistic temperament.”  Nobody wants to do hard, painstaking work.  but you can.  a phrase you hear in sports is very relevant here – “there’s a world of difference between ‘can’t’ and ‘don’t want to.’”  Law taught me that I could do excellent work in a field that offered me no inspiration whatsoever. The other thing law is good for is embedding the notion that each word has a mathematical value.  In law, “plaintiff” or “contract” has to mean the exact same thing every time it’s used in a document.  It takes discipline to work with mathematical words and put them into correct sentence-equations.  Then, when you write poetry, you get to explode it all and let a word mean a different thing every time it occurs in a stanza.

BhB: Lalita, you have your Ph.D in Microbiology, an amazing background in scientific writing, and experience in the scientific field. What attracts you to creative writing then?

LN: Well, back home in India, there wasn’t much of a dichotomy between science and literature. My parents, both educators, pretty much encouraged all learning. My father was a botany professor; my mother was a English and Geography teacher. But we had literary books all over the place juxtaposed with volumes of plant and animal life.

When I was 11 years old, my 5-year-old sister died from colon cancer (unheard of in those days) and I began writing about her because I wanted my siblings, all under the age of 7, to know her. It was the first time I experienced the immeasurable gift of solace that writing brings. The poem, “Mustard Seed” in my poetry book is for her.

Although I chose to major in botany in college all my friends were from the English department. That’s where I spent my free periods. I belonged to the “Shakespeare Society,” and acted in Bernard Shaw’s You Never Can Tell and Tennessee Williams The Glass Menagerie. And I read as much as I could of whatever my friends read. But I had no formal training in literature. Science was my focus because I needed scholarships and assistantships to come to America, and science was my only ticket– although honestly, I love science just as much as creative writing. I don’t think I’ve ever lived with one without the other.

BhB: Are people usually shocked when you tell them you write poetry and fiction? If so, why do you think that?

DC: I think people are more shocked when I tell them I’m a lawyer.  I usually get some version of “but you’re so  . . . pleasant.”  I think people are less shocked to hear that I write poetry than they are when they read the actual poems.  As my friend says about the contrast between my appearance and my work, “who knew the president of the PTA was thinking THAT?”

LN: Well, actually my very first publication came early in my writing career–a paid creative nonfiction piece in Catholic Digest, so that’s where I thought I should focus. But by then I’d begun writing stories, and later usurped my own lyrical phrases into what would eventually become poems. The simple truth is that I just love writing.

My writer friends aren’t exactly shocked at my waffling between genres. Some believe it dilutes one’s focus, and impedes mastery over any one form, sort of like being a jack of all trades and master of none–and rightly so. But I am done climbing ladders as a scientist. My writing life is mine to plork! (play and work)

BhB: Doritt, does having your law degree help with your writing at all?

DC: See response to question 2, supra.  (hint:  that’s both the answer and a law joke).

BhB: Lalita, how do you incorporate Indian culture into your stories? Do you think this helps you stand out from other writers?

LN: Well, I was born and raised in small towns in India, and only came to the US in my early twenties, so India runs in my blood, and seeps naturally into narratives. It’s easy because I have authentic experiences of the basic elements of fiction–setting, characters, plot, and so on. But I feel the same way now that America is my home. My novel (in the agent-seeking stage) is set in Bombay and Baltimore. My short stories and poems often deal with separation, dislocation and cross-cultural issues. I feel blessed that my readers relate to my work because ultimately these are human issues. After all, home isn’t a physical space and in that sense everyone leaves home.

As an Indian woman, I suppose it helps me stand apart from western writers, but no more so than other groups, because the emotions associated with loss or joy are universal.

BhB: What do you hope to gain from the upcoming reading event?

DC: Ummmm . . . the same thing I hope for every reading – that I entertain people and help them to understand my poems.

LN: First, I hope that people will come to listen since I’m longing to read my work to them. This is my first poetry book and I’d like to get some exposure as a poet. I also hope to reach people who don’t usually read or like poetry because they just might surprise themselves. My work is unpretentious and accessible. I’m also excited to meet and read with Doritt Carroll at a beautiful location, Mark Cottman’s Gallery in Fells Point. I think it will be a lovely evening for everyone.

BhB: What advice do you have for aspiring writers?

DC: Write. And then improve what you write.  You improve by reading a lot of poets and figuring out how they solved the problems you find yourself in.  Gerry Connolly, author of Province of Fire, taught me that in the first workshop I ever attended. Take a hard, unsentimental look at the world around you, and then put what you see down on paper.

LN: I don’t honestly feel qualified to give people any advice, per se. I began writing late in life, and “became a writer” only when I discovered “free summers” (teaching science) and turned away from life as a research scientist. So, I’m driven by knowing that time is short. And if I forget, my left knee reminds me. So, if I want to write, I have to just do it. That’s really what it’s about.

It’s not a choice if you’re one of few fortunate writers who make a living by writing. But it is, for many writers. I inspire myself by reading writers whose work I love or just staring out a window. I teach and attend workshops; simple writing exercises, playing with words or phrases also get the juices flowing. And frankly, the act of writing anything at all turns into inspiration for something larger.

One thought on “Proof that science and law can mix with creativity: an interview with Doritt Carroll and Lalita Noronha”

This site uses Akismet to reduce spam. Learn how your comment data is processed.